Stephen King’s legacy as a bestselling horror/psychological fiction writer is attributed to his writing style. Because readers can identify with many of King’s three-dimensional, dynamic characters, his stories captivate and engage his loyal fans and first-time readers. For example, the protagonist in “Carrie” is a high school girl ostracized because she is different. Nearly everyone, at some point in their adolescence, has experienced the sting of rejection by their peers or the profound, psychic pain of suffering repeated emotional abuse. 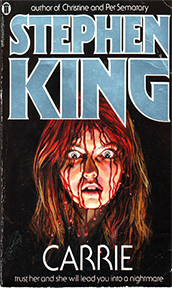 Carrie was Stephen King’s first novel, published in 1974, with a print-run of 30,000 copies. King favored an epistolary form to produce realism in the novel by using a combination of letters, news clippings, magazine articles, and passages from books.

Stephen King also creates identifiable characters that elicit immediate sympathy from readers due to inherently flawed but human traits. Beverly Marsh, the poor girl in IT, was abused by her father; Nick Andros was the deaf-mute in The Stand; and Wendy Torrance was Jack’s long-suffering wife in The Shining. 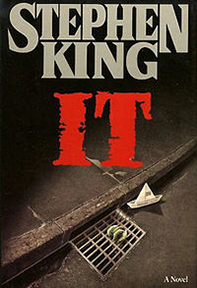 The horror novel IT was published in 1986. The story tracks the escapades of seven children as an eponymous being (in the form of a clown) terrorizes them. King tells the story through narratives shifting between two time periods. It is mostly told in the third-person all-seeing mode. IT addresses King’s most beloved themes: the omnipotence of memory, childhood suffering, and the monstrousness prowling behind a disguise of classic sectarian values.

King’s Use of Metaphors and Symbols

King frequently embellishes his themes by using a metaphor, a literary device that compares two seemingly independent subjects without directly implying the association. Specifically, King’s use of the “extended metaphor,” or one that encompasses an entire body of work, is evident in novels like The Green Mile, in which John Coffey can heal the sick but dies in the end because of men committing atrocious “sins.” One of the protagonists in The Green Mile, a large, African-American man named Coffey, seems to mirror the life of Jesus Christ, although the story is set in the death row area of a Depression-era prison. King’s The Green Mile is a serial novel published in 1996. The book exemplifies the genre of “magical realism,” in which King introduces his readers to supernatural elements taking place in an ordinary, realistic environment.

Other metaphors used by King that effectively intensify the themes of his stories include the Randall Flagg/Satan association in The Stand; the terrifying clown called IT, which may represent our childhood and adult fears and how we easily allow them to rule our lives; and the Needful Things store in the novel of the same name, a metaphor that reveals the possible consequences of desiring what are essentially objects without any real value.

In his novel Christine, King has stated in interviews that Arnie’s car symbolizes “the end of innocence,” or that time when getting your first car means you are no longer a carefree, innocent child but a culpable adult with responsibilities. King’s horror novel Christine was published in 1983. King tells the story of a classic car controlled by ghostly powers.

In The Shawshank Redemption, the posters of Rita Hayworth and other glamour girls symbolize every inmate’s powerful desire to once again live a normal life outside the prison. This symbolism is further reinforced by the holes in the concrete walls which the posters conceal from the prison guards. All memorable literature contains conflict, foreshadowing and suspense. King is the master at integrating these three literary devices into all of his novels and short stories by creating dynamic characters that not only react to events occurring around them, but who also experience some kind of pronounced, psychological change due to either adapting or relenting to the compelling event.

Even when some of King’s characters fail to survive the conflict, he still manages to make us feel sorry for them in a weirdly satisfying way. At the end of The Shining, when Jack Torrance attempts to regain his real self and tells his son Danny to ” … run away … remember how much I love you,” we understand that, although Jack is now a crazed murderer possessed by an evil spirit, the “father” side of his soul can never be taken away from him. King’s horror novel The Shining was published in 1977 and became his first hardback bestseller. The Shining is greatly influenced by Shirley Jackson’s The Haunting of Hill House (a ghost story), Edgar Allan Poe’s The Masque of the Red Death (a gothic horror story) and Robert Marasco’s Burnt Offerings (a haunted house story).

Five Tips to Turn Your Writing Into a Business

Considering your writing as a home BUSINESS is a mindset. Let's look at how you can develop that mindset, and develop your writing into a thriving business. Are you looking forward to taking your freelance writing business to the next level by landing big time corporate clients? One of the most disturbing truths...

How to Sell Your True Life Story

Popular magazines each have their own policy for accepting real life stories. Some offer a flat rate to everybody who has a half way decent tale to tell...

Every job marketplace (e.g. Elance.com, oDesk.com and Freelancer.com) require you to write a competitive proposal to bid on freelance jobs.