If you’re unsure what an epigram is, you don’t have to feel bad about it. It can be difficult and confusing to define the epigram, because historically, writers have used it to describe a broad range of things. The first epigrams were verses used by the Greeks for the inscriptions on statues or other monuments to the dead. The Romans were the first to use epigrams as satirical devices, and William Shakespeare made them popular as poetic closed couplets. But modern epigrams are not confined to verse.

What is an epigram?

Most famous sayings that engage readers and make them ponder the meaning of what is said can be considered epigrams. Probably the most famous author of non-poetic epigrams is Oscar Wilde, who is also one of the most quoted writers of all time.

“I can resist everything except temptation.”

Or,
“To love oneself is the beginning of a lifelong romance.”

Oscar Wilde used these epigrams in his work to make it more dynamic, funny, and meaningful. The fact that so many of his epigrams are still quoted over a century after his death means he did it quite successfully.

Though many people still associate epigrams with poetry, using epigrams in a short story can make your fiction come alive with wit. How, then, do you actually come up with one? The answer depends largely on what you want to say.

What’s the secret to writing epigrams?

The real secret to writing epigrams is to say something that your reader won’t soon forget. In attempting to use a few epigrams in a short story, you could end up revisiting how you play with language altogether. It can be hard to craft a truly memorable epigram, but once you do, it’s guaranteed to stand out. So give it a try. After all, experience is the name we give to our mistakes. I bet you know who said that. 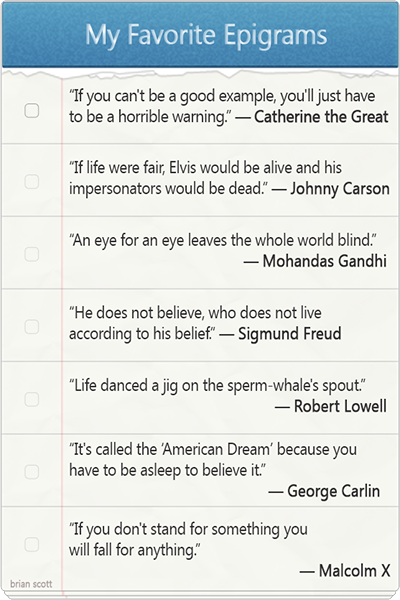 Top 5 Tips to Write An Interesting Narrative for Any Story

WRITING NARRATION - You can discover numerous ways of crafting an intriguing narrative. Some narrative methods are so refined that a skilled writer has...

Story Ideas From the 4 Seasons

So regardless of what season you are in, it's important for you as a writer to make note of the details and nuances of that time of year. Observe your...

We mean that people with the right kind of minds and the right interests can write interesting poems, stories and plays.